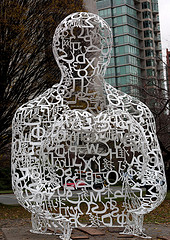 A panel of guests from the worlds of academia, business, politics and the media debated the pros and cons of language learning in the UK in the 21st century. The discussion, which lasted an hour, quickly went into arguing whether languages were a necessity or somewhat of a luxury. The dreaded question of whether languages should be made compulsory was also discussed.
I found the discussion stimulating due to the range of backgrounds represented by the panel and although I did not personally agree with some of the comments, I found them at least thought-provoking.
The panel included:
Professor David Crystal, an eminent linguist and author, also patron of the Association for Language Learning, and president of the UK National Literacy Association.
Richard Hardie, from the Swiss bank UBS and also Chair of the Hackney Learning Trust. He read History and French at university, before pursuing a career in business and corporate finance. He is now Non-Executive Vice Chair of UBS Ltd in London, which is part of the UBS Group, the world’s largest financial asset manager.
Baroness Royall of Blaisdon , Shadow Leader of the House of Lords, Leader of the House of Lords 2008-10 and a languages graduate, who has supported languages on a number of occasions in the Lords. She was spokesperson for Education in 2010 and takes a special interest in foreign policy and development.
Professor John White, an educational philosopher from the Institute of Education in London. His research field is the mind of the learner and the relationship between educational aims and their applications to school curricula. His published work includes 'What schools are for and why’, and ‘Rethinking the School Curriculum: Values, Aims and Purposes’.
The discussion was very aptly chaired by Rosie Goldsmith, a journalist specialising in arts and international affairs. During her 20 year career at the BBC, she covered events such as the fall of the Berlin Wall and the revolutions in Eastern Europe and also presented BBC Radio shows like 'Front Row' and 'Crossing Continents'. She is now a media consultant and a proud of champion European languages and literature.
These are the following points made by the different members of the panel:
Baroness Royall:
“Those who know nothing of a foreign language know nothing of their own” Goethe
Oracy and literacy in English are supported by the study of a foreign language.
Languages are a tool for acquiring knowledge, enriching Intercultural Understanding and boosting the competitiveness of the UK economy.
Languages boost individual employability-they are always considered as an asset by employers.
All children should have the same opportunities to access languages whether their schools are in the state or the private sector.
Everybody speaks English? This is contradicted by the need for more professional linguists like translators and interpreters.
There is a worrying disparity between the language provision offered to children in the public and the private sector that can only be put right via compulsion.
It is a positive fact that the Ebac includes a language.
The previous government did a lot for Primary Languages [Where are we now?]
We need to lobby-our place in the world has changed.
Continuous process
Richard Hardie:
Professional lives are undoubtedly coloured and enhanced by the study of languages.
Graduate with working knowledge of languages are highly valued-it is a sign of effort and dedication to studies.
There is a shortage of bilingual Brits.
Well-taught graduates will have a good command of grammar, technical vocabulary can then be added later.
Involvement in the Speak to the Future campaign, promoting cross-phase languages.
The best communicators speak languages-there may also be a link with private schools but nobody is sure which way around it actually works.
Social exchanges in business are supported by good language skills.
There has been a delay in the UK in realising that selling was affected by a lack of languages skills.
Only 5% of EU jobs are taken by UK citizens
Prof John White:
Should every child learn a language?
The argument that it helps with jobs is not convincing.
There is also a cultural argument-is it a worthy aim good to understand the nuances but not something that cannot be done without?
Learning a language helps to understand how languages work.
“Students might not want to work abroad” [This is often mentioned by students who think that knowing a language is not useful in the UK and it is denying the personal benefits of studying a languages!]
Prof David Crystal
Multilinguism is the norm. It is natural, 50% of the world population is trilingual.
Chomsky describes the Multilingual Acquisition Device we are all born with.
Languages are essential to support the understanding of a multicultural society.
Sense of identity is strongly linked with languages-another language is important to understand somebody else’s appreciation and viewpoints.
“Teenagers are disaffected- that’s what they are for!!-learning another personality is not best done during teenage years.
Languages are essential to being a good citizen in a multi-ethnic society.
Rosie Goldsmith
Champion of languages?
Arsen Wenger, Rory Bremner… scientists , people who are not necessarily linguists.
CBI and DFE declined to attend the conference
A Language Prize to recognise achievement in languages -like achievement in other academic areas- would support the view that languages are important.
Posted by Isabelle Jones at 23:31

Email ThisBlogThis!Share to TwitterShare to FacebookShare to Pinterest
Labels: Event

Thanks for this summary.

Thanks so much for this. I shall be reporting on the ALL conference at our Australian French teachers conference and this a terrific summary which I shall share.