Parallel Reading with the Parallel Books app-A Way into Literature and Translation? 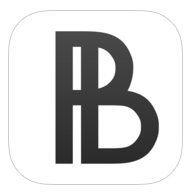 Matt Thomas contacted me a while ago to trial his Parallel Books app. The principle is simple, you get a text that is in the public domain, you get a good translation and you use the app the read both texts side-by-side.
Easy? Well... Thank you to Matt for telling us about the story behind the development of this great app that is just fantastic to get our higher ability pupils to dare reading in a foreign language just as literature and translation have re-appeared in the new GCSE specifications. The books are well known classics so although the texts are complex, it gives pupils a sense of confidence as it is known territory. 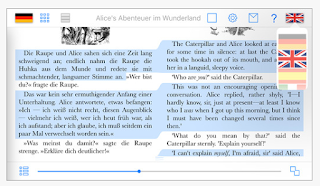 "I started making Parallel Books a couple of years ago, although it was only released in December last year. I've done it at the same time as been the main care giver for 2 toddlers, so it's been lots of nights programming from their bedtimes till midnight!

You were asking about the reason I started. I was wanting to challenge myself to make a high quality app, so I was looking for ideas.

I spent my whole adult life as a professional musician with a popular band in NZ. When touring Europe one time, I met my wife, who was the singer in another band on the same circuit.

We both ended up leaving our bands and working together playing music. I moved to Switzerland, and found that I needed to learn some new languages!

I have a number of English speaking friends here, and one day one of them told me how he was reading Roger Federer's biography, and that he had bought it in both English and German to read at the same time.

That's when the lightbulb went off in my head, that I could make an app that makes this process easier. It's a great method to practice a new language, but keeping the two books in sync is a bit of a pain, and I realised that I could make this part of it easier within an app.

It turns out that it is actually quite complicated to program this, and there is a lot going on behind the scene to make it appear so simple and user friendly on the surface.

Currently all books in Parallel Books are free. This means that I can only use either texts that are public domain (copyright free) or that I acquire permission to use. 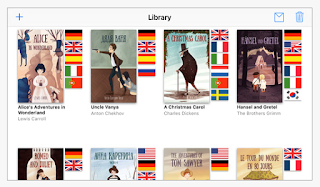 If you know of any good Spanish texts I could include, do let me know! Essentially the author AND the translator have to have been dead for 70 years in order for them to be out of copyright.

I'm also interested in finding very beginner level texts I can use, which have also proven allusive."

Anything else you need to know about "Parallel Books"? Oh yes... It is free :)

Translation is Back! 20 Ideas for Teaching Translation

Last month, I was delighted to publish a translation resource on the fabulous Teachit site.
The resource is not language-specific and the ideas can be adapted to many languages.
I hope it is of use! 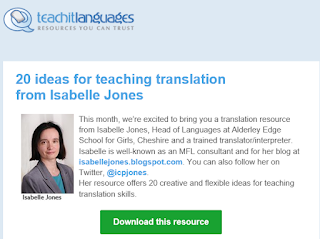 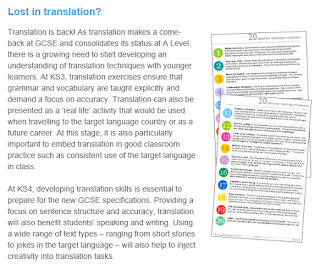 The resource can be downloaded as a free pdf at
http://www.teachitlanguages.co.uk/searchresults?resource=26267
Posted by Isabelle Jones at 14:16 No comments: Links to this post

If you want to be reminded of the differences between the new GCSE specifications in Modern Foreign Languages for teaching from September 2016, the following document should be useful to you.